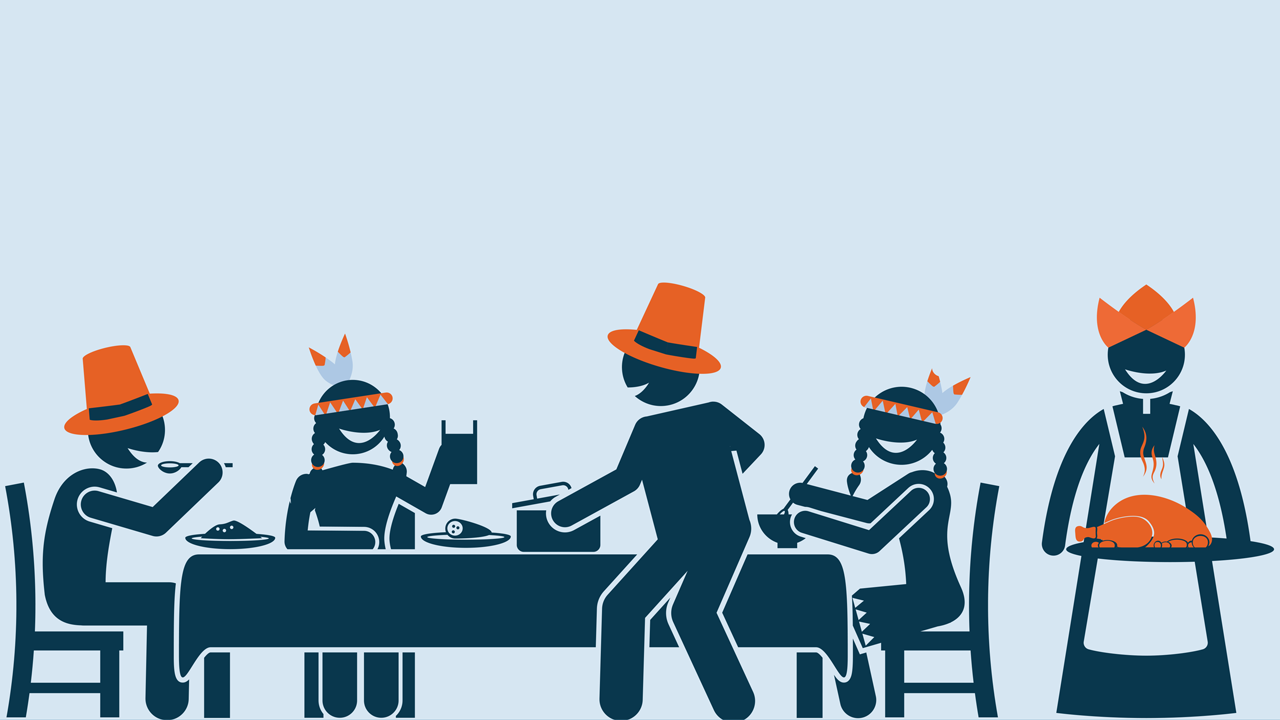 Thanksgiving in America traditionally kicks off the holiday season, which encompasses Thanksgiving, Hanukah, Kwaanza and New Year’s Eve. But how did Thanksgiving become a national holiday? Did Pilgrims from England really start the tradition?

Giving thanks for the Creator’s gifts had always been a part of Wampanoag daily life. From ancient times, Native People of North America have held ceremonies to give thanks for successful harvests, for the hope of a good growing season in the early spring, and for other good fortune such as the birth of a child. Giving thanks was, and still is, the primary reason for ceremonies or celebrations.

The very first Thanksgiving was not “Thanksgiving” at all, but rather a three-day festival celebrating the first bountiful harvest in America aided by neighboring Native Americans, a tribe called the Wamapanoag. The people who sailed to the “New World” aboard the Mayflower were members of an English Puritan sect called the English Separatist Church.

In 1676, the governing council of Charlestown, Massachusetts determined that the community needed to set aside a day to express thanks for the blessings they had received. June 29 was chosen to be this day of thanksgiving. On October of 1777, all thirteen colonies joined in a one-time thanksgiving celebration. George Washington then declared a National Day of Thanksgiving in 1789. Finally, in 1863, President Abraham Lincoln instituted the last Thursday in November to be celebrated nationally as a day of thanksgiving. In 1939, President Franklin Roosevelt moved Thanksgiving Day forward one week, as it is presently celebrated.

Corn, sweet potatoes, and pork form the backbone of traditional southern home cooking, and these staple foods provided the main ingredients in southern Thanksgiving additions like ham, sweet potato casseroles, pies and puddings, and corn bread dressing. Other popular southern contributions include ambrosia (a layered fruit salad traditionally made with citrus fruits and coconut; some more recent recipes use mini-marshmallows and canned fruits), biscuits, a host of vegetable casseroles, and even macaroni and cheese. Unlike the traditional New England menu, with its mince, apple and pumpkin pie dessert course, southerners added a range and selection of desserts unknown in northern dining rooms, including regional cakes, pies, puddings, and numerous cobblers. Many of these Thanksgiving menu additions spread across the country with relocating southerners. Southern cookbooks (of which there are hundreds) and magazines also helped popularize many of these dishes in places far beyond their southern roots. Some, like sweet potato casserole, pecan pie, and corn bread dressing, have become as expected on the Thanksgiving table as turkey and cranberry sauce.